Thank you for contacting us! If needed, you will hear back within 48-72 hours.

Danielle graduated from Northeastern University in 1998 with a Bachelor of Science in Athletic Training. Upon graduating, Danielle worked as a high school athletic trainer at Walpole High School and Boston Latin School. In 2003 she opened Orthopedic Rehab Associates. Danielle is a Corrective Exercise Specialist through the National Academy of Sports Medicine.  She also works as a subcontractor for the NBA and is responsible for the sports medicine of the officials during Celtics games. As an avid runner and a mom of a gymnast and soccer player, she has taken an interest in running kinematics and gymnastics injuries. Danielle has run 6 Boston Marathons as well as the 2016 Chicago Marathon.  She is planning on running the New York City Marathon in 2021.

Mark Lembo graduated from Northeastern University in 1996 with a Bachelor of Science in Physical Therapy. After graduating, he worked in private practice at South Shore Sports Therapy in Weymouth for seven years focusing on orthopedics and sports medicine. Mark also had the privilege of working alongside the chief of orthopedics at South Shore Hospital, Dr. Owen McConville, for 5 years which enhanced his knowledge of orthopedic surgery and post-operative rehab. In 2003, Mark and his wife Danielle opened Orthopedic Rehab Associates. Mark lectures at the Pembroke and Marshfield Council on Aging and enjoys working with the local community.

Brianna graduated from Northeastern University with her Doctorate of Physical Therapy in May 2017, and has worked in outpatient orthopedic physical therapy on the South Shore since graduating. Bri’s clinical interests include incorporating manual therapy techniques and functional strengthening to rehab both post-operative and non-surgical patients. In 2021, Brianna achieved the distinction of becoming an Orthopedic Clinical Specialist (OCS) by passing her ABPTS Board examination. She is also certified in Personalized Blood Flow Restriction Rehabilitation (BFR) and Graston Technique, and has taken continuing education courses in concussion management and treatment. In her spare time, Bri enjoys traveling to her native Long Island, running for causes such as Team in Training, and going to Duxbury Beach with her dog.

For The South Shore

Orthopedic Rehab Associates would love your feedback. Post a review to our profile

Dana graduated from Fitchburg State University in 2013 with a Bachelor of Science in Exercise and Sports Science with a focus on Clinical Exercise Physiology. He continued his education at Bay State College and became a licensed Physical Therapist Assistant in 2016. His love for fitness motivated him to become a Strength and Conditioning Specialist in 2020.  Dana loves all sports and the outdoors. He grew up playing baseball and hockey and continued through high school. Dana became interested in physical therapy and general conditioning after sustaining his own sports injuries. Dana works as a PTA and also leads our personal training and post rehab conditioning programs at ORA.

Google review
Our Hours
Our Locations

Orthopedic Rehab Associates would love your feedback. Post a review to our profile 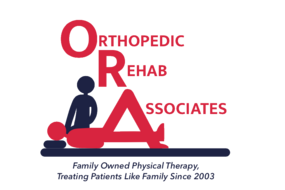